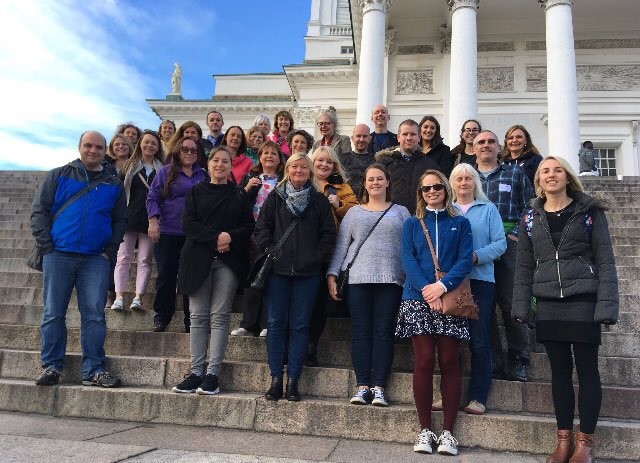 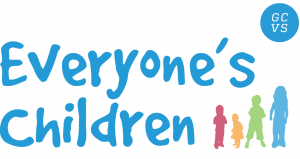 I took part in the Children in Scotland study trip to Finland in October 2018. Here are some reflections on the trip.

First, some background and context: Finland has a population of around 5.5 million, the majority of whom live in the south of the country. Over 1.4 million people live in the Helsinki metropolitan area. In common with many Western countries, there is a low birth rate and the population is ageing. The main language is Finnish but around 5% of the population speak Swedish as a first language – and all street signs are in both Finnish and Swedish. The Finnish language is related to Estonian and Hungarian and is said to be a very difficult language to learn. The only word we learned was ‘kiito’ (both please and thank-you) – to add to our other Finnish word ‘Sauna’.

Fun fact: Finland invented the sauna and there are 2.5 million saunas in the country.

Finland has one of the world’s most extensive welfare systems, based on a collective responsibility to ensure everyone a decent standard of living. The Central Union for Child Welfare (an NGO) told us that around 12% of children under 18 live in low income households and are at risk of poverty. In Scotland, the child poverty rate is around 24% (33% in Glasgow). It’s not clear whether these figures are comparable, but it does suggest that there is a much lower poverty level in Finland. This is probably related to the more generous welfare benefits. 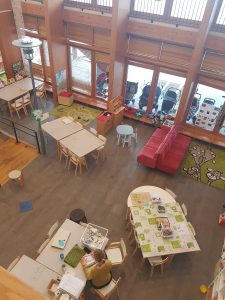 Childcare
Up to the age of three, parents have a choice between home-care payments or a place for their child in a crèche/day care centre. From three to seven, children generally attend day care. Day care is organised by municipalities – so the eligibility rules vary. However, generally families can have between 20 hours and 40 hours a week. Fees, subsidised by the state, are capped at a maximum of €290 (£250) a month (free for those on low incomes) for 5-day, 40 hours a week care.

The day care centres that our group visited were wonderful. Beautifully designed, lots of space. Day care is based on creative play – there is no formal learning until children start schools at seven. At least twice a day – for at least an hour at a time, regardless of the weather – children go out to play in Finnish Early Education and Childcare centres.

Education
The Finnish Education system is one of the highest ranked in the world. The Finnish government believe that excellence comes from equity and wellbeing. School is compulsory between the ages of 7 and 16. Almost all education is provided by the municipalities (very few private schools). There is no streaming by ability and no formal exams until the age of 18. All school meals are free.

Teaching is a high status profession and all teachers are educated to Master’s degree level. The staff at the Ministry of Education and Culture repeatedly used the word ‘trust’. There are no league tables of schools and no inspectorate. There is a national curriculum, but teachers have wide discretion about how they teach.  The emphasis is on teaching children to learn rather than teaching facts and figures. Most pupils study English as a compulsory subject from the third grade (at 9 years of age). We met and spoke to a number of school pupils who had impressive language skills.

It’s clear than Finns spend far more on their education system than is spent in the UK. Most classes have between 16 and 20 pupils. Finnish schools have dedicated staff on site to support children with additional needs. Most additional needs pupils are taught in mainstream classes but in the two schools we visited, there were a few additional needs classes with between 5 and 10 pupils each. Schools also have social work, school nurses, school doctors and educational psychologists on site. 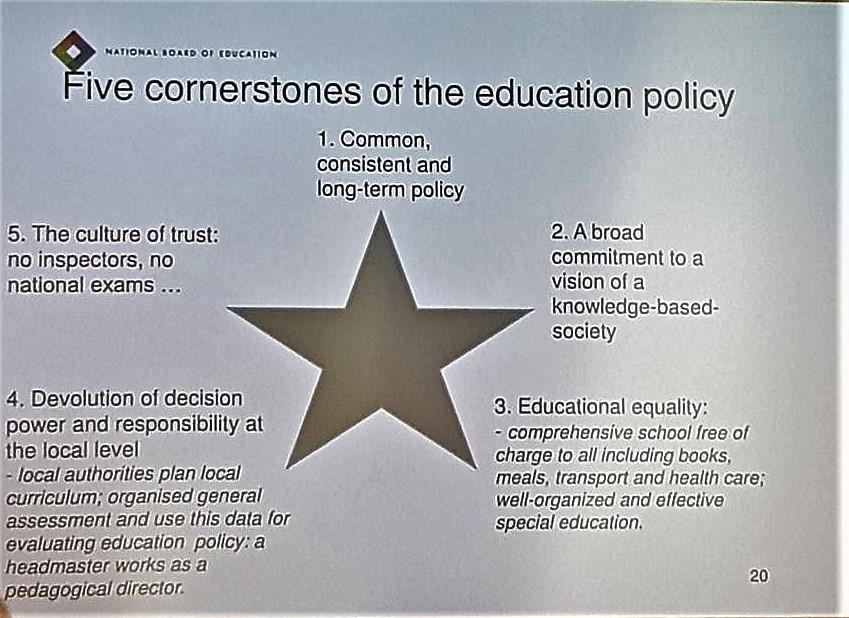 Migrants
Finland has welcomed refugees and the foreign-born population has increased significantly in the last decade.  Around half a million people (8% of the population) have a foreign background most of whom are from Russia, Estonia, Somalia, Iraq and Yugoslavia.

We had an opportunity to see the impact of this when we visited Vesala School, a large comprehensive school in the suburbs of Helsinki. The school is in a low income area and has a high proportion (20%) of foreign-born pupils. We visited a first year class where a majority of the pupils were recent migrants who were learning Finnish. The school received special funding, due to its deprived socio-economic demographics (a bit like PEF in Scotland). This was mainly used to employ extra teachers to reduce class sizes and some interpreters to speak to parents. The school aimed to get pupils fluent in basic Finnish as quickly as possible and the teacher was using tablet computers on which the children did exercises and played games designed to improve their language skills. 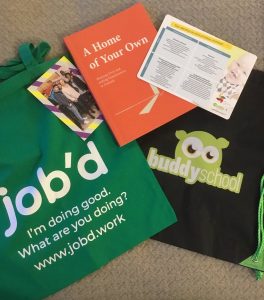 Youth work
Later, we visited Migrant Youth Helsinki. Their focus was to reduce the attainment gap between migrants and indigenous Finns. There is a high unemployment rate of 25% among migrant youths (compared to 4% of Finns). They set up a working group of police, social work, education and youth work to create a framework of support.

They had several projects, built up by trial and error. Buddyschool encourages older pupils who struggle with behaviour/academic progress to help younger migrant children to learn. This scheme has improved literacy skills of migrant children and increased the confidence of the older children. Schools across Helsinki are now rolling out the scheme, adapting it to their own needs.

Migrant Youth Helsinki has also established an impressive job creation scheme called Job’d. This pays the wages for migrant youths to work with elderly people. Young people also worked as staff at events in Helsinki in order to gain experience to apply for full-time permanent posts.

As in many other countries, young people hanging about street corners is a problem in Finland. We visited Aseman Lapset (Children of the Station) project. This was founded in 1990 to ensure that young people had safe adults around when they were on the street. The charity leased premises opposite Helsinki Central Station and used this as a drop-in café. They also offer a street mediation service, which is used to resolve disputes (such as damage to property) without court hearings. There are now a number of drop-in cafes around Helsinki and in 10 other areas in Finland. The project also has a converted bus that tours more remote areas. The service has good relationships with social work and the police, who often refer young people to the project.

Youth homelessness
There were 7,000 homeless single people and 214 homeless families in Finland in 2017/18. In comparison, there were 34,972 homelessness applications in Scotland, including 14,075 children in the same year. We met with Finnish housing association, the Y-Foundation, to find out how Finland has reduced its homelessness levels. They told us that Finland adopted ‘Housing First’ as its national housing policy in 2007. Homeless people are given a social tenancy on a normal lease and individually tailored support services are provided as required. Finland has closed all its large scale homeless hostels and converted them to mainstream flats. There are some small-scale schemes to cater for short-term needs (such as safe houses for young homeless men) and some for people fleeing domestic abuse.

What was striking (from a UK perspective) is the way that statutory and non-governmental organisations co-operate and work in partnership, within the common framework. Additionally, there didn’t seem to be a shortage of funds to build new homes. There were an impressive number of building sites around the city, constructing homes for sale, rent and co-operative living. 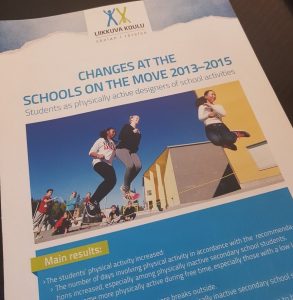 Mental Health
Although Finland scores highly on the ‘Happiest Country’ international index, it also has a reputation for youth suicide and depression. We learnt that the suicide rate has dropped significantly, as economic prosperity has increased but Finns are now focusing on mental wellbeing in schools. We met with the Finnish Association of Mental Health who have developed an impressive range of resources for schools as part of the Health and Wellbeing curriculum, and provide free residential courses for teachers (funded by the Ministry for Education and Culture).

Exercise is part of the effort to improve mental well-being. We visited Finnish Schools on the Move, which has a huge range of partners working to ensure that exercise is a key part of the curriculum. We observed this in action in the day care and schools that we visited. There was an emphasis on outdoor play (whatever the weather), dancing in the classrooms, ping-pong tables in the corridors, hula hoops and standing desks.

Nature also plays a part in improving wellbeing. One of the schools had a huge greenhouse in the centre of the school, which housed an impressive array of rabbits, guinea pigs, hamsters, reptiles and birds. The children were given responsibility for looking after a particular pet. The headteacher said that it aims to teach children about responsibility, empathy and gives them a sense of purpose and belonging in the school. 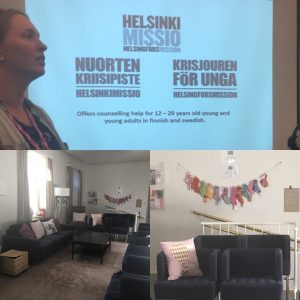 Our final visit of the trip was to Helsinki Mission. They offer free counselling for young people aged 12-29. The key issues they deal with are loneliness, anxiety and depression. Impressively, they have a drop in service where people can be seen the same day, a telephone service and a service that is able to give appointments much more quickly than many schools, universities or employers.  They also have over 800 volunteers who work with young people as mentors and a peer-support volunteer service for parents who are struggling. Young parents could also use ‘Alberts Living Room’ – a homely space staffed by senior volunteers who work with parents who are lonely and whose wellbeing is at risk.

Summary
The theme of co-operation and sharing resources was echoed across many of the organisations we visited. There didn’t seem to be an atmosphere of competition for funds.  Many organisations receive financial support from governmental sources such as the Ministry of Social Affairs and Health and the Ministry of Education and Culture. Others receive support from trusts and foundations, such as Me-säätiö (the We Foundation) which was established by two Finnish Entrepreneurs. Some third sector organisations are commissioned to provide services to municipalities. Traditional forms of fundraising are also evident: Helsinki Missio raised 25,000 euros by selling hand-knitted socks.

Although we have some great examples of cooperation, partnership working and sharing of good ideas in Scotland, it would be good to see more. This is much more difficult when organisations are in competition with each other. 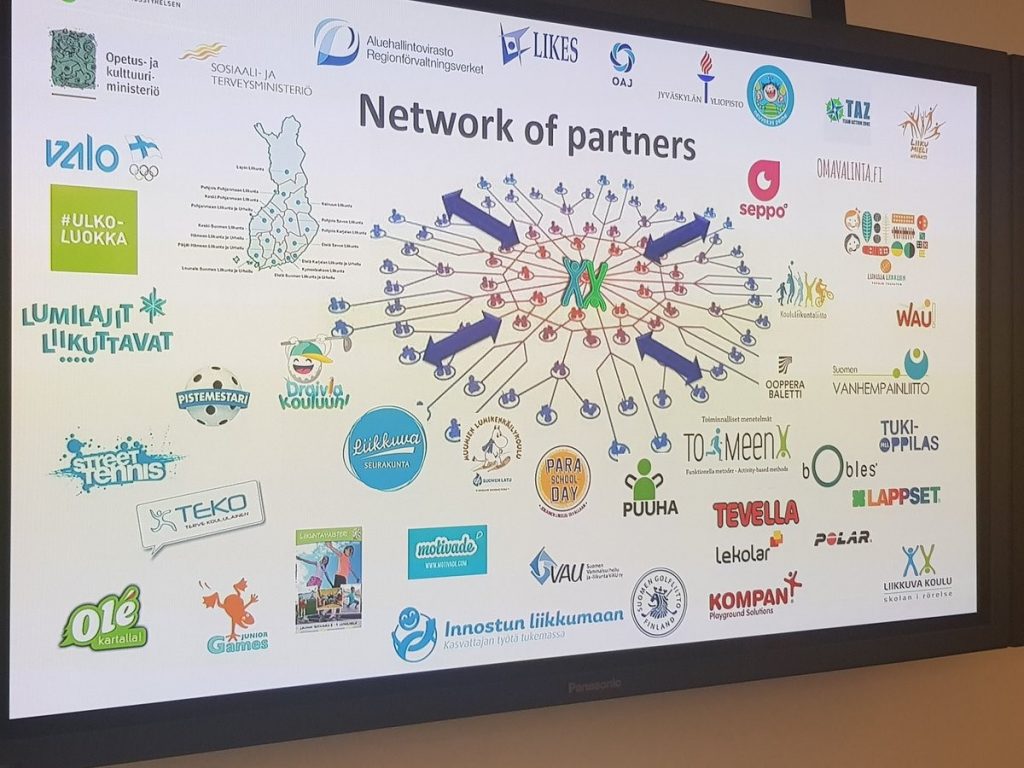 There is also clear evidence of an ethos of the importance of a more equal society, and higher spending on day care, education and housing. It would be great to have much smaller classes and more support to teachers and pupils. But there are things we can learn and adapt for Scotland.

Finally, thanks to Catherine, Erin and Sally from Children in Scotland for their hard work in putting the visit together and making sure that we all got around the city. And to the other great people I met on the trip from a wide variety of backgrounds – it was great to meet you and I hope we stay in touch.