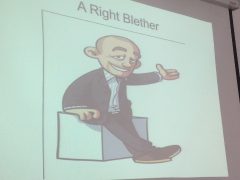 On 4th May we hosted an event for the outgoing Children and Young People’s Commissioner, Tam Baillie. It was a brilliant afternoon, where Tam reflected openly about his time in post, talked about the progress he feels has been made for children’s rights in Scotland and the barriers that children living in Scotland still face.

We had a wonderful turnout on the day (despite the sunny weather outside!) with a variety of Third Sector organisations there to listen to Tam chat about his experience as the Commissioner.

Some of the key points that Tam focused on were: The event also allowed attendees to talk to Tam about current issues they feel are affecting children and young people in Glasgow at present.

To say thank you to Tam for the support he has given GCVS over the years, and for all the work he has done for children and young people in Scotland, we presented him with an Honorary Lifetime GCVS Membership!

When asked what he would do next, Tam responded: “I want to get up every day feeling excited” – so we here at GCVS hope this happens, Tam!